Chairman of the US Senate Foreign Relations Committee, Senator Robert Menendez (D-NJ) said that the next government of Bangladesh should act quickly to reform the existing legal framework, including labor laws for Export Processing Zones, and bring it into conformity with international labor standards.

Senator Robert Menendez issued a committee report on Friday in Washington on safeguarding and advancing gains in labor rights for Bangladesh’s garment workers. 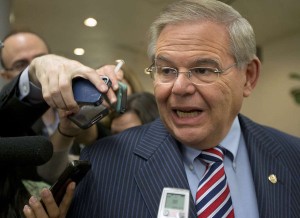 “The tragedies in Bangladesh present an important opportunity to improve labor rights and empower workers,” said Chairman Menendez. “No consumer will want to wear clothing if it’s stained by the blood of innocent workers.”

“One year ago, the world woke up to the horror caused by unsafe working conditions for Bangladesh’s garment workers. We should not rest until these individuals are given the rights they deserve and the tools they need to protect themselves,” Menendez added.

The report was issued one year after the Tazreen Fashion factory fire that killed 112 workers. In April 2013, a collapse at RanaPlaza factory resulted in the death of 1,131. Both tragedies galvanised world attention towards the plight of garment workers in Bangladesh.

The report was based on a field visit by the committee’s majority staff to Bangladesh in August 2013, as well as extensive staff meetings with experts and stakeholders in Washington, D.C.

The report recommended that the United States government should hold the government of Bangladesh to the highest standards in implementing the action plan to reinstate US Generalized System of Preferences (GSP) benefits, especially provisions pertaining to labor law reform and protecting the freedom of association and the rights to organize and bargain collectively.

The US government should increase funding for technical assistance programs in Bangladesh, such as those run by the AFL-CIO’s Solidarity Center, that improve workers’ capacity to organize and engage in collective bargaining, it recommends.

The report said apparel brands and retailers, especially those with very large operations in Bangladesh like Wal-Mart, Gap, and others in the Alliance for Bangladesh Worker Safety, should, in coordination with the International Labor Organization (ILO), launch long-term, well-resourced programs to educate their suppliers in Bangladesh of their expectation for compliance with laws allowing the right to organize unions and bargain collectively.

“Apparel brands and retailers should also collectively develop and implement a policy of zero-tolerance for suppliers who consistently engage in anti-union activity.”

In June, Sen. Menendez chaired a hearing on labor issues in Bangladesh and called on the Administration to suspend preferential trade status or Generalized System of Preference (GSP) to Bangladesh.