Robi has organized a session named “Internet4U” for the students of Presidency University under its Corporate Responsibility (CR) initiative. More than 100 students and faculty members took part in this engaging session. The students were made aware of the role Internet is playing in facilitating Digital lifestyle.

With the increasing demand for data, people are resorting to internet as a gateway to digital lifestyle. However, many of us, especially the youth, are failing to fully capitalize on this 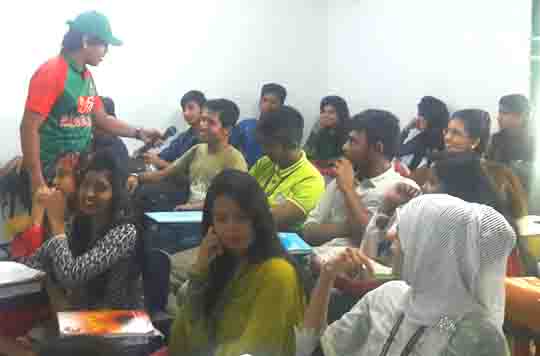 changing trend due to lack of awareness on the proper and effective use of internet. As a responsible operator, Robi has endeavored to address this gap with a CR initiative named “Internet4U”. The initiative attempts to introduce the college and university students across the country to “proper and safe” use of internet as a tool for networking, learning and self- development.

Previously similar sessions were conducted in Amrita Lal Dey College at Barial, University of Barisal, Daffodil University and in the Internet Corners set up by Robi at the Rajshahi, Rangpur, Khulna, Sylhet and Barisal divisional public libraries.

Robi Axiata Limited is a joint venture between Axiata Group Berhad, of Malaysia and NTT DoCoMo Inc., of Japan. Robi is the second largest mobile phone operator in Bangladesh in terms of revenue, with 27.6 million subscribers, as of February 2016. Robi network provides nationwide coverage to 99% of the population with 13,444 BTSs and over 3,951 3.5G sites. Robi proudly claims to have the widest international roaming service in the market, connecting about 385 operators across more than 145 countries. It is also the first operator to introduce GPRS and 3.5G services in Bangladesh. The Company has introduced many first of its kind digital services in the country and has invested heavily in taking mobile financial services to the underserved communities in the rural and semi-urban areas.