A fraction pro-Awami teachers of Shahjalal University of Science and Technology(SUST) on Monday observed an half day work abstenation from 9 am to 12pm protesting the assaultation of BCL men on teachers. The teachers also organized a rally holding black badges ignoring the heavy rain.

On the other hand, Students organized a rally following a human chain in the campus protesting the same incident. 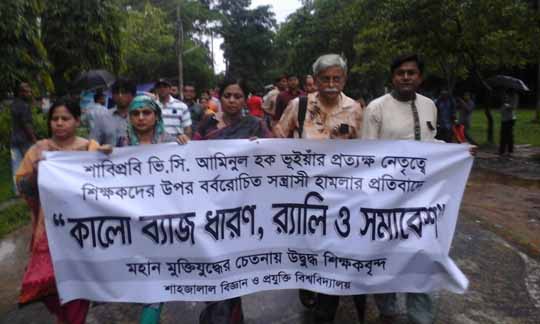 Authority has been formed a three member inquiry committee headed by Prof Sabina Islam, dean of school of Physical Science to investigate the incident. The other two member are proctor Md. Qumruzzam and Associate Professor of Social Work department Amina Pervin respectably.

Sources said, the teachers brought out a procession from in front of the Cafetaria at 10am wearing black badges. They paraded the whole campus and ended at in front of the Administrative building where a protest rally was held.

On the others hand, the students under the banner of ‘Shadharan Shikkharthi’ formed a human chain in front of the Central Library on the campus at 12:30pm protesting the attract on teachers and demending punishment to the culprits ignoring the heavy rain. A procession was also brought out from the same place that paraded the whole campus and ended at the same place, later. A rally was also organized in the same demand.

The Keyperson of the Agitated teachers Syed Shamsul Alam said, The BCL men induced the most disgusting events in the history of the university which was led by the vice-chancellor Aminul Haque Bhuyan. It is most

Earlier on Sunday, The BCL men was assaulted several teachers and seized the banner who are ongiong movement demanding removal of university VC.